Summary: Thanks for the Feedback. The Science and Art of Receiving Feedback Well. Douglas Stone, Sheila Heen

Thanks for the Feedback. The Science and Art of Receiving Feedback Well

We live in the world of constant feedback, in which we are regularly evaluated, criticized, receive advice and recommendations. As schoolchildren and students, we submitted thousands of assignments that were graded and took endless exams. As adults, we must participate in interviews where our every word is judged, listen to criticism from management and undergo performance evaluations at work. And how should we interpret "you scream all the time" or "you never understand me" that we face in our personal lives?

Being the recipient of feedback becomes a serious test, just as it is to give feedback. Even if expressed to people with the best of intentions, criticism comes across as aggressive, comments appear biased or inappropriate, and assessments seem erroneous. We neither want to communicate negative information nor do we want to receive it. And this is why we are afraid of feedback and try to avoid it. Our need for love and acceptance conflicts with our desire to learn and improve. But practice shows that people who are open to feedback are more effective, adapt to new roles more easily and get more job satisfaction, while an inability to accept criticism leads to senseless conflicts and tension.

There are three types of triggers preventing us from receiving feedback adequately.

Truth triggers. Comments seem to us unfair and inappropriate. ("What do you mean by 'I’m being arrogant?' – I’m the embodiment of friendliness!")

Relationship triggers. The focus gets shifted from the content of the feedback to the feedback giver, or to the relationship the recipient has with him or her. ("Who is he to judge me? What does he even know about this? He’s just wants to spite me!")

Identity triggers. It seems to us that criticism threatens our system of self-perception. In an attempt to preserve the "psychological me", we refuse to discuss our weaknesses. ("Well, of course, I always mess things up.")

All of these reactions are natural but interfere with constructive feedback. Next, the authors will talk about how to counteract them and how to hold conversations regarding feedback.

When truth triggers are activated, our first response to feedback is outrage: "That’s not true!" As described above, such comments seem to us unfair, offensive, and inappropriate. To avoid falling into this trap, you need to learn to distinguish between the various types of feedback. 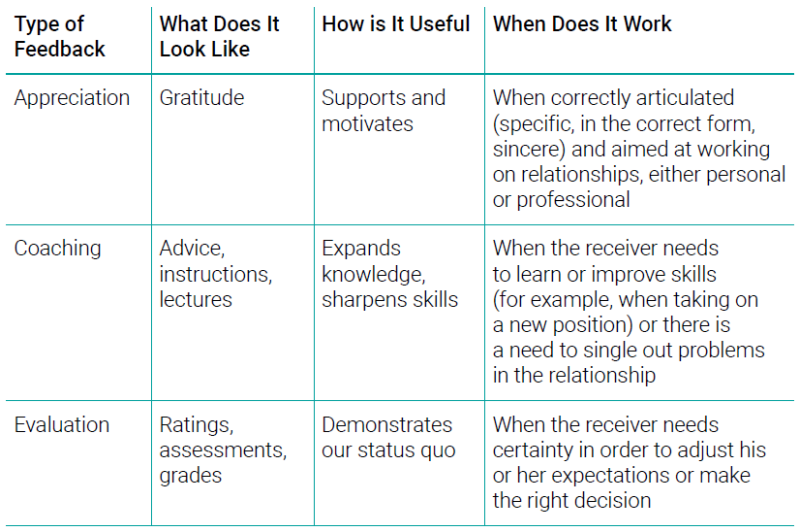 Truth triggers are activated because:

Feedback types are mixed. All types of feedback are needed, however each of them works separately. If you decide to express gratitude to someone, you should not give advice at the same time – this will devalue your appreciation. If in your organization formal assessments are customary, do not conduct them during a coaching session – the assessment should come first. It is important for us to know what our status is, only then are we ready to receive instruction.

When a student receives a paper back from a teacher, he first of all looks at the grades and only then reads the teacher’s comments.

A father teaches twin sisters to play baseball. He shows the girls how to hold the bat and how to throw a baseball. One of the girls is delighted and tries to do as her father shows her. The other is angry that her father corrects her. The problem is that one perceives what is happening as coaching and learns from it, while the second girl feels that she is being evaluated. The father is demonstrating how to do it better, but she perceives his instructions as proof that she is doing poorly.

The same facts are interpreted in different ways. When we talk about something, we know exactly what we mean; we are keeping a vivid image in our head. But the person on the other end hears only the words, but he does not see the image.